Back to Faith at Work Spotlights 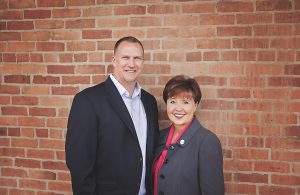 How did you come to faith in Christ?

Ric – Originally when he was in 8th grade during an altar call when attending a church service with a neighborhood friend.

Ric & Melissa (together) – Ric started attending a Men’s Bible study group in late 1995, while working at the Post Office. Melissa was a stay-at-home mom with 3 kids under 3 and unable to attend church activities until they both started attending a couples’ Bible Study in January 1996. The leader of the group identified that if a person had already accepted Christ in his/her heart, the next step would be water baptism. Ric & Melissa were both baptized on February 20, 1996 and began their walk with Christ together. On September 4, 2005, Ric & Melissa re-affirmed their faith as their 3 children decided to be baptized – resulting in the entire family being “baptized” in the Pacific Ocean at Kailua Beach Park, Hawaii by their church pastoral staff during open baptisms (New Hope Windward).

How does your faith impact the way you do business?

As a family that lives by faith, this company was founded on faith. While we have been in public service roles for decades as part of our individual careers, we have always been entrepreneurs at heart. This business was born approximately 9 years ago, as our relationship with our own personal house cleaner was beginning and the idea was introduced. Over the past 3 years, we felt God had called us to be obedient with numerous parts of our lives. Our obedience paved the way for the idea to become a plan, and the subsequent launch of Premier Clean. This company represents more than just a business for us, it’s an opportunity to have more freedom and to serve as a couple. This business represents our opportunity to develop relationships and continually serve those that we interact with and those we serve. Finally, it allows us to pursue other areas of the small business world, including leaving a legacy for our children and grandchildren. As we step out in obedience in this new adventure, our faith continues grow as does our reliance on Christ. He’s never failed us yet and continues to lead us down paths to new relationships, just as He’s done with The Christian Blue Pages!

Please share a story where you saw God move in your business or impact a customer.

This business has been in the making for 9 years, first through Ric & our lead cleaner, Celma. Five years later, Melissa and Celma discussed the vision of the business. Ric had been living out of state since 2009, only coming home on weekends, holidays and some occasional remote weeks. 2 ½ years ago, we felt prompted by God to “downsize” by selling our larger home, moving into a temporary apartment for a year and move back into our “old” home (that had been a rental for 13 years) after it had been flipped/rehabbed. We moved back into our home in 2017 and the only step “left” was for Ric to secure employment somewhere in Central Ohio, which ended up being a job at Wright-Patterson AFB. Side note, Ric had been trying on his own to get a job at WPAFB for the previous 9 years, to no avail.

We both prayed and felt like God was still stirring the business idea within both of us. We prayed and said that Ric needs to be in Ohio for this business to become a reality. That was earlier in 2018. In July 2018, Ric was “by-named” to a key position at WPAFB by a former supervisor, with whom he worked with 5 years ago. Once he secured the job (perfect in his role/duties and in pay), we both realized that God had answered a HUGE prayer and we had our part to do by starting the business. We stand here today, just 3 ½ months after starting the process!

The 2nd story relates to a customer. Our 4th customer since starting the business 6 weeks ago. The customer called Melissa’s personal cell phone and asked about the cleaning services. During the conversation, it was realized that the customer needed a One-time deep clean, in order to get their home “Market ready” the day after the clean. The call came in on Thursday afternoon and the main cleaning team was to be out of the office until Tuesday evening. The customer wanted the cleaning to occur on a Monday, as their house was to be put on the market on Tuesday morning. While talking to the customer, Melissa felt very strongly that she and her husband were to go and clean the home, in place of the lead clean team. Having another job, her prayer was that her schedule would be clear in order to have time to go clean. Her main job’s meeting schedule was adjusted by her Director, leaving Monday completely open to clean. Melissa, Jamie (the Office Administrator) and Ric (who took a half day off) all cleaned this family’s home from 10am – 6pm. After the cleaning was finished, the customer made a comment that he had never had his home professionally cleaned before, although his wife had been asking for this service. He said, “From here on out, I will never have my house professionally cleaned again UNLESS it is your company or my wife or myself.” “The reason being is that if the OWNERS can come and clean my home on their hands and knees, that tells me about the dedication and integrity you both have, as well as the nature of your business!” He then asked for more than a handful of business cards so he could pass them out!

What we didn’t realize going into this job was the valuable lesson our leadership team would learn as the result. It really opened our eyes to the level/amount of work we are asking our teams to complete. That day, we learned the value of doing work the right way, not cutting corners for the sake of saving time, and what we’re asking of our staff. It was definitely an eye-opening experience and at the same time a tremendous blessing!